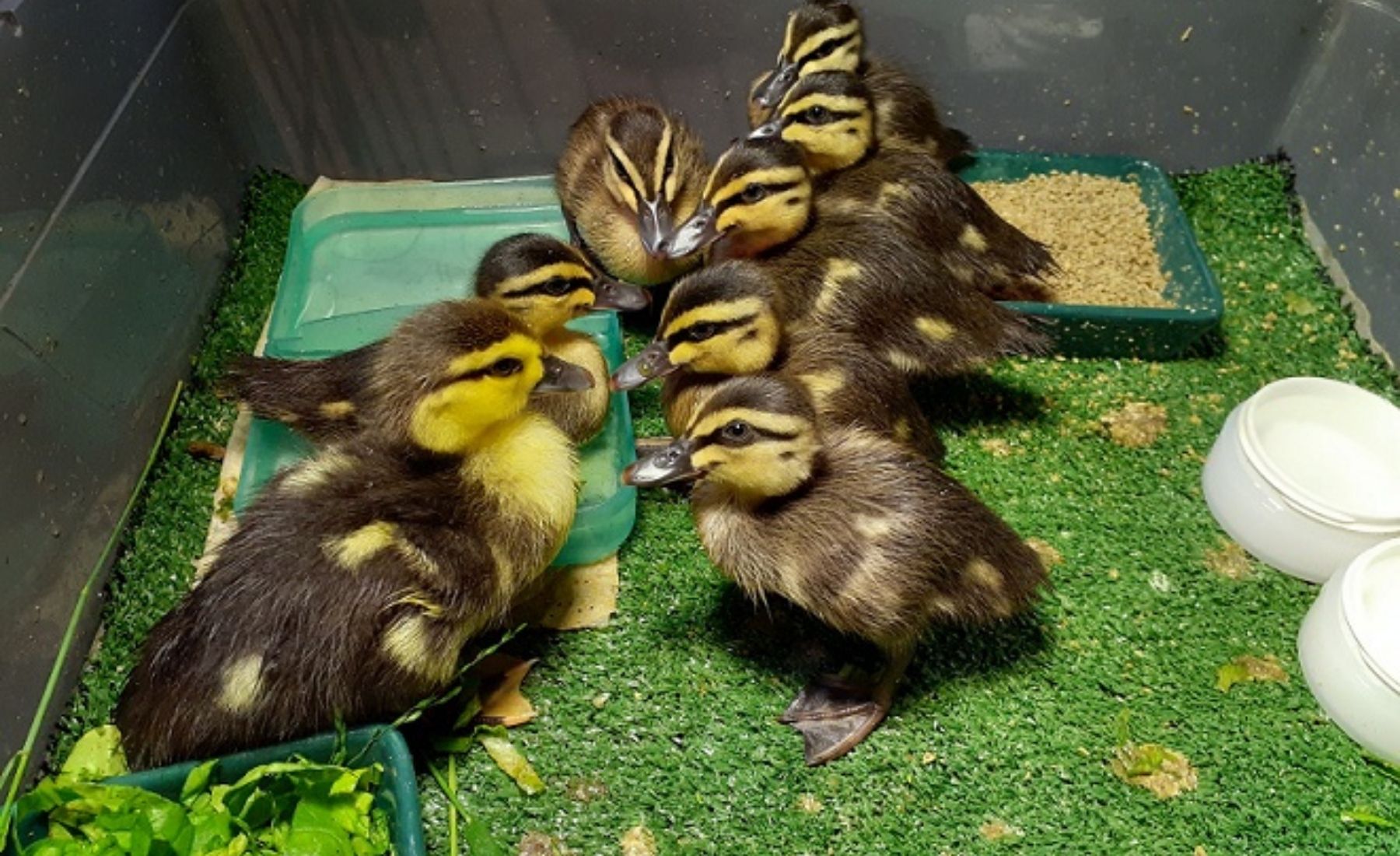 When our volunteer Tracey Reid from Northern Beaches District got the call out for a Pacific Black Duck in distress after an altercation with a dog, she had no idea she would end up incubating and hatching the eggs.

Tracey calmy managed what was quite a chaotic situation. A resident’s dog picked up and then dropped a female duck. It flew into the pool before taking cover on the pool deck where it laid an egg. The member of the public (MOP) located another clutch of eight eggs in a nest by the pool area. The male duck then set upon the injured female duck, pecking at it before flying off.

The MOP very kindly took the female duck down to the local vet to be examined. Tracey liaised with the vet and requested an X-Ray to confirm the extent of her injuries and determine if she still had any eggs on board. Sadly, she sustained a break in her wing and some punctures, so she was humanely euthanised.

Tracey took custody of the nine eggs, the last of which was laid earlier in the morning by the pool amid the commotion. She placed these safely inside an egg carton in her rescue basket and stored them in a cool place at her home.

She was now on a very steep learning curve, not having come across this situation in her three years as a Sydney Wildlife volunteer. After consulting with a range of sources from Taronga Zoo to the Reptile Park, species coordinators and Dr Google, she came up with a strategy.

Tracey discovered that ducks don’t start incubating until they lay their last egg, which gave her a much-needed window of opportunity. She learned that duck farmers collect and store eggs for two to three weeks, keeping them in a cool room at a temperature of 13°C before the commercial incubation process begins.

This took the pressure off and gave Tracey valuable time to purchase an incubator which presented another challenge as there was a shortage of incubators in Sydney due to COVID-19. She managed to find a supplier on the Northern Beaches and opted for a mid-range model that automatically rocks the eggs, as otherwise she would need to turn them manually four times a day. Tracey set the incubator up according to the instructions and started playing a game of naughts and crosses on the numbered egg shells to monitor movement.

Like an expectant mother, Tracey checked the eggs at regular intervals of 7, 14 and 21 days to observe the duckling’s development through a technique known as candling. This requires putting light on the egg to see growth.

From day 25 to 28 things started to ‘rock and roll’ as the ducklings began to hatch. Tracey documented each egg’s progress from the moment bulges appeared, to when the eggs started to crack, and the first glimpse of a beak as they wiggled their way out of their shells and started chirping as though they were calling to each other.

Amazingly, eight out of the nine eggs hatched, with egg No.3 being a yolker. Sadly, duckling No.2 struggled to get out of its shell a day later than all the others and despite Tracey’s best efforts died 24 hours later. But seven out of nine ducklings is a remarkable achievement, just like water off a duck’s back for Tracey!

The ducklings will be kept separately and remain in Tracey’s care for six to seven weeks until they are ready to fly the coop at eight weeks. This is likely to take place at Sydney Wildlife’s facility at Waratah Park where they can free-range and self-release safely.

So, there are two lessons from Tracey’s unique story. Firstly, please watch your dogs around the pool if you live in an area where ducks may visit. And secondly, it highlights the importance of establishing when the last egg is laid as it allows up to three weeks before they require manual incubation.